Where is the Beef? The 6 Papers That Turned the World Up-Side-Down

About the News on “No Harm” from Red Meat

You have heard it by now. For sure. Several academic articles hit the press (below the belt) on October 1, 2019, published by the Annals of Internal Medicine:

“Patterns of Red and Processed Meat Consumption and Risk for Cardiometabolic and Cancer Outcomes: A Systematic Review and Meta-analysis of Cohort Studies” (here)

“Effect of Lower Versus Higher Red Meat Intake on Cardiometabolic and Cancer Outcomes: A Systematic Review of Randomized Trials” (here)

“Red and Processed Meat Consumption and Risk for All-Cause Mortality and Cardiometabolic Outcomes: A Systematic Review and Meta-analysis of Cohort Studies” (here)

“Reduction of Red and Processed Meat Intake and Cancer Mortality and Incidence: A Systematic Review and Meta-analysis of Cohort Studies” (here)

An all-out attack was, is, and continues to be expected from all sides against these 6 articles. No one is surprised. I am also not surprised by the bias of the media–that too was, is, and will be expected. I enjoyed my own confirmation bias about these newsflash reports.

I took notes from one of the news releases–The New York Times:

“’Irresponsible and unethical,’ said Dr. Hu, of Harvard, in a commentary published online with his colleagues. Studies of red meat as a health hazard may have been problematic, he said, but the consistency of the conclusions over years gives them credibility.
Nutrition studies, he added, should not be held to the same rigid standards as studies of experimental drugs.

Null findings of zero association don’t grow over time into a “statistically significant” findings. They gain no credibility toward causal or associational effects over many years. If there are no associations, then there will be no associations later on either. And what is the “evidence” that would persuade the American Cancer Society from studies that show no evidence?

Here is the explanation for Hu’s statement:

Taken as screen capture from a YouTube presentation on the validity (or lack thereof) of greenhouse gas emission percentages, which you can find here.

And these are the people who make decision for us about what we should be eating.

Interesting that the author notes the conflict of interests associated with one researcher she interviewed, who was not part of the study:

“Dr. Allison, who was not involved in the study, has received research funding from the National Cattlemen’s Beef Association, a lobbying group for meat producers”,

but completely ignored the others she interviewed, who also were not part of the study, but opposed the papers published, such as Dr. Hu, quoted here:

“‘Red meat used to be a symbol of high social class, but that’s changing,” said Dr. Frank Hu, chair of the nutrition department at the Harvard T.H. Chan School of Public Health in Boston. Today, the more highly educated Americans are, the less red meat they eat, he noted.”

a statement, which is not even close to being true.

He wrote a textbook on Obesity Epidemiology (Oxford University Press 2008), sits on the AHA/ACC Obesity Guideline Expert Panel, was on the 2015 Dietary Guidelines Advisory Committee, USDA/HHS (the new food pyramid, now known as the “My Plate“). He is also author of many papers that are anti-red meat, such as “Association of changes in red meat consumption with total and cause specific mortality among US women and men: two prospective cohort studies” (here) and whose work is supported by  the True Health Initiative, a plant-based diet organization with vegetarian or vegan members, such as Dean Ornish. This organization has a stunning page with the list of its supporters. The most stunning is an image I screen captured here for its shock-effect: 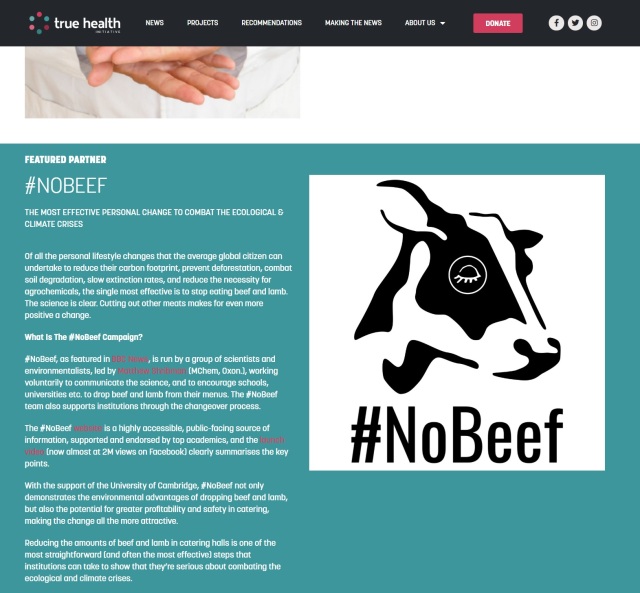 This image you can find on the True Health Initiative page here.

There are several major fallacies in the greenhouse gas emission associated with cows, some of which I carefully addressed in a previous article here. The most important fallacy though that no one likes to talk about is methane, the byproduct of fiber metabolism by bacteria in the cows’ (or people’s) digestive system.

I hate to be the one to bring this news to you but it makes no difference who’s digestive system those fibers get to be broken down into bits and pieces: humans or cows. The same bacteria will create the same amount of methane, no matter which animal digests it. Hence, if it is not the cows, then it is the people whose flatulence will contribute greater to the methane greenhouse gases if humans are forced to eat lots of (or only) plant-matter. No pun, this is for real.

There was also some huge misinformation associated with the amount of greenhouse emission. I am told the original academic article that made such fuss about its magnitude was retracted because of the huge errors in the very thing they made the fuss about. I didn’t read that paper and am not sure how to find a retracted paper–if you know which paper it is, please comment with title and link below.

Nonetheless, the correct data appears to be insignificant in emissions associated with cows. The New York Times paper notes the global numbers:

“Meat and dairy are big contributors to climate change, with livestock production accounting for about 14.5 percent of the greenhouse gases that humans emit worldwide each year.”

which may be true. However, the US EPA estimates that all US agriculture (including plant and animal farming and ranching) produces only 9% of the emission. Livestock is responsible for 4% and beef only 2% (that means 5%, the majority, is associated with produce farming!) and transportation 28% of the US greenhouse gas emission. See screen capture below: 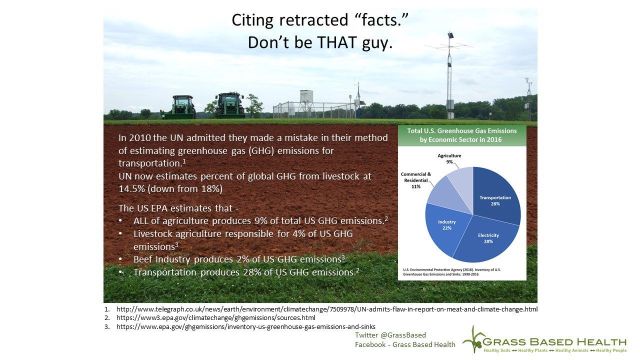 The above information is from here, here, and here and image is a screen capture from a twitter conversation.

In a statement, scientists at Harvard warned that the outcome of these papers published will “harm the credibility of nutrition science and erode public trust in scientific research.”… yeah… right…what trust… long eroded if there ever was any.

I am now reminded of the certificate nutrition course I took at Harvard not too long ago; you can find my article on that here. Harvard is undoubtedly the most famous name when it comes to nutrition but not sure why. Their business model is to make money on whatever recommendations they make–be it good or bad, even if harmful. They support evil foods that we all know cause inflammation: PUFAs (industrially processed goo labelled as vegetable or seed oils), processed foods, teach that there is no difference between omega 3 and omega 6 fatty acids and their balance doesn’t matter, and suggest that in the Paleo diet people eat roaches. Despicable organization with questionable teaching practices.

The general conclusion of all 6 articles:

“Conclusion:
The magnitude of association between red and processed meat consumption and all-cause mortality and adverse… outcomes is very small, and the evidence is of low certainty.”

Comments are welcomed, as always, and are moderated for appropriateness

Angela A Stanton, PhD, is a Neuroeconomist focusing on chronic pain--migraine in particular--physiology, electrolyte homeostasis, nutrition, and genetics. She lives in Southern California. Her current research is focused on migraine cause, prevention, and treatment without the use of medicine. As a forever migraineur from childhood, her discovery was helped by experimenting on herself. She found the cause of migraine to be at the ionic level, associated with disruption of the electrolyte homeostasis, resulting from genetic variations of all voltage dependent channels, gates, and pumps (chanelopathy) that modulate electrolyte mineral density and voltage in the brain. In addition, insulin and glucose transporters, and several other variants, such as MTHFR variants of B vitamin methylation process and many others are different in the case of a migraineur from the general population. Migraineurs are glucose sensitive (carbohydrate intolerant) and should avoid eating carbs as much as possible. She is working on her hypothesis that migraine is a metabolic disease. As a result of the success of the first edition of her book and her helping over 5000 migraineurs successfully prevent their migraines world wide, all ages and both genders, and all types of migraines, she published the 2nd (extended) edition of her migraine book "Fighting The Migraine Epidemic: Complete Guide: How To Treat & Prevent Migraines Without Medications". The 2nd edition is the “holy grail” of migraine cause, development, and prevention, incorporating all there is to know. It includes a long section for medical and research professionals. The book is full of academic citations (over 800) to authenticate the statements she makes to make it easy to follow up by those interested and to spark further research interest. It is a "Complete Guide", published on September 29, 2017. Dr. Stanton received her BSc at UCLA in Mathematics, MBA at UCR, MS in Management Science and Engineering at Stanford University, PhD in Economics with dissertation in neuroscience (culminating in Neuroeconomics) at Claremont Graduate University, fMRI certification at Harvard University Medical School at the Martinos Center for Neuroimaging for experimenting with neurotransmitters on human volunteers, certification in LCHF/ketogenic diet from NN (Nutrition Network), certification in physiology (UPEN via Coursea), Nutrition (Harvard Shool of Public Health) and functional medicine studies. Dr. Stanton is an avid sports fan, currently power weight lifting and kickboxing. For relaxation (yeah.. about a half minute each day), she paints and photographs and loves to spend time with her family of husband of 45 years, 2 sons and their wives, and 2 granddaughters. Follow her on Twitter at: @MigraineBook, LinkedIn at https://www.linkedin.com/in/angelaastantonphd/ and facebook at https://www.facebook.com/DrAngelaAStanton/
View all posts by Angela A Stanton, Ph.D. →
This entry was posted in Food War, Healthcare, Must Read, nutrition, This & That, Thoughts and tagged eat red meat, greenhouse gas emission is a joke, healthy cow, red meat and associated diseases, red meat dangers, red meat is bad for us, red meat is good for us, research on red meat, should I eat red meat, what about meat, what is the greenhouse gas emission from cows, what's with red meat. Bookmark the permalink.

17 Responses to Where is the Beef? The 6 Papers That Turned the World Up-Side-Down

Leave a Reply to Angela A Stanton, Ph.D. Cancel reply